As the presence of 2014 looms and draws ever closer it is only fitting to reflect on the year that was for Armwrestling Australia. 2013 was an absolutely MASSIVE year, and exceeded all expectations for the Australian Armwrestling Federation, and for all of us involved in its operation.

Not only was there a huge growth in interest in the sport from the public and more media exposure, active competitor numbers grew yet again, making each competition bigger and seemingly better. In addition to this, the general quality of Australian armwrestling has evolved and advanced over the past 12 months.

2013 is going to be a hard year to top, although 2014 is sure to see the sport take yet another quantum leap forward, leaving 2013 in its wake and dwarfing it in the process. The sport has quickly gone from being a small collection of die-hards training when and where they can to a large base of competitors training specifically to be the best that there is within Australia.

Unless you were involved in some sort of hostage situation for several weeks, cut off from the outside world completely  at the start of this year, you were almost certainly aware of the presence of the world’s greatest ever armwrestler in our country.

John Brzenk, the man whose achievements in his chosen sport make the head spin in almost disbelief, graced the Australian armwrestling community with his presence at the 2013 FitX Championships. John, being a quiet and unassuming kind of guy disappeared in a sea of shiny, well groomed fitness enthusiasts at the Melbourne FitX. This kind of reserved behaviour and humility was in stark contrast to the professional bodybuilders and strongmen also in attendance…that was until John hit the stage for the John Brzenk challenge. 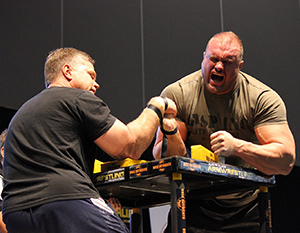 A substantial cash prize was offered to anyone who could pin John in a standard, officiated armwrestling match. Unsurprisingly, John defended his reputation thoroughly, despite a serious challenge from Norwegian strongman, Lars Rorbakken, and Australian powerlifting record holder, Alan Kliese.

John was also good enough during his time here to offer up his knowledge and expertise to many of our competitors in private training sessions. Two sessions were held in Melbourne, and one in Sydney, and all in attendance were given a once in a lifetime chance to learn from the very best there is, and may ever well be.

John’s presence at FitX 2013, along with a competitor list that included many of Australia’s best along with two of the very best New Zealand competitors, provided a hugely successful and exciting 2nd annual FitX invitational competition.

Many of the matches were some of the most intense we have ever had the pleasure of witnessing, and this competition seemed to set the tone for what was set to come for the rest of the year. Rivalries were solidified in the meeting of Jamie Carle and Phil Rasmussen, and the grinding onslaught between Sam Saffuri and Grant Tolentino, only months after their battles at the 2012 Nationals. New competitors also made their presence felt, leaving an indelible mark in their weight divisions as a forewarning of things to come.

Not only did our competitors show a higher level of competence and professionalism in the sport throughout the year, Murray McKay raised the standard extremely high for running competitions in general, putting on one of the most exciting armwrestling events of the year with the 2nd annual WA championships. Murray didn’t only hold a fantastic competition, he put on an armwrestling spectacle, bringing in a large audience for the event and drawing in armwrestlers from all over the nation.

The WA Championships are fast becoming the premiere event preluding the AAF Nationals, and if an armwrestler manages to perform here taking away victory, or at least instilling fear in the hearts of his or her opponents, it sends a ripple through our community and sends a message loudly and clearly to all those would be challengers.
There is no doubt that Murray will be aiming to top this incredible event in the next year, so if you’re not saving for the flight or training for the competition just yet you’d better get started now!

Tasmania, often overlooked by mainlanders, all tucked away down there, made a big debut on the armwrestling circuit with its own state championships in 2013.

The event was held in conjunction with the absolutely huge CAPO powerlifting championship at the Derwent Entertainment Centre in beautiful Hobart, and despite our armwrestlers being in the shadow of a bigger event, with even bigger competitors in attendance, armwrestling solidified its presence in the strength community within Tasmania.
This event was another step forward for armwrestling in Australia, making it a truly national sport with a state championship in almost every state’s largest city now, widening our ever growing competitor base, and exposing the sport to a wider audience yet again.

The Tasmanian championship is sure to draw competitors from all over Australia in the coming year, and will soon take its place as one of the biggest events on the armwrestling  calendar. 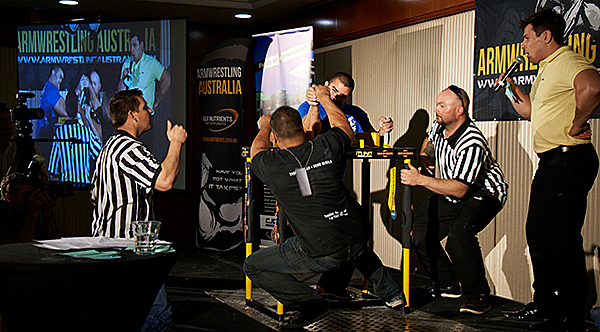 By now, many of you will have seen the video of the 2013 Championships, and will know just why we keep referring to the raised level of competition and general standards in our athletes and organisation. This was without any exaggeration a world class event. It may not be a Nemiroff, it may not be the A1 Russia Championships, but it is a national competition that has made the world aware of the presence of armwrestling in Australia. 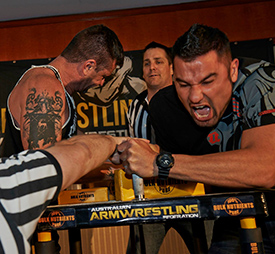 The event was held at the Novotel Hotel’s main ballroom in the heart of Sydney, NSW, and played host to an unrivaled number of competitors and spectators for any competition held thus far in Australia. The AAF pulled out all the stops on this competition, with a full audio – visual set up, allowing a live feed and streaming of the action as it happened. In addition to a highly professional visual aspect to the competition, the AAF also provided the first ever interactive online scoring and ranking system live. This was a big first for the AAF, and successfully launched an interactive element to our competitions that has not been seen before in armwrestling.

The competition was fierce, exciting, and desperate as many were seeking to claim or reinforce their dominance in Australian Armwrestling.
This event was a fitting closure to an equally exciting year.

2013 was the year that armwrestling truly evolved in Australia, going from being the forgotten cousin of the strength community to the fierce, smoldering, tall and dark stranger more than ready to take its place at the table of the Australian strength sport scene.

So over the holiday period eat, relax, and enjoy yourself as much as possible, for as soon as 2014 hits armwrestling is going to explode and if you are looking to make a name for yourself in the sport you are going to need all of the drive, grit, motivation, and dedication that you can possibly summon to compete at the level that is being set within Australia!

Devon "No Limits" Larratt in OZ!Nationals Results 2013
There are no tags associated with this post.