A different kind of training

It is a great recognition for World Armwrestling Federation (WAF) at the SportAccord Convention, Sochi - Russia, 19-24 April 2015.

Due to our application situation, SportAccord Council proposed to add a point in the constitution in order for WAF to receive the Provisional Member status.

WAF applied for full membership at SportAccord with 52 members from which only 28 where considered eligible, recognized members by National Sport Authorities. According to the current rules we needed 40. This statute would had given us the possibility to obtain the other requested national recognitions easier with the SportAccord Membership (Provisional).

By 2% of the votes, the proposal of the SportAccord Council haven’t obtained the 2/3 majority needed to made statuary changes.

At the moment WAF have the Observer status in SportAccord General Assembly and our application is open. We keep on working to collect the missing 12 National Recognitions. 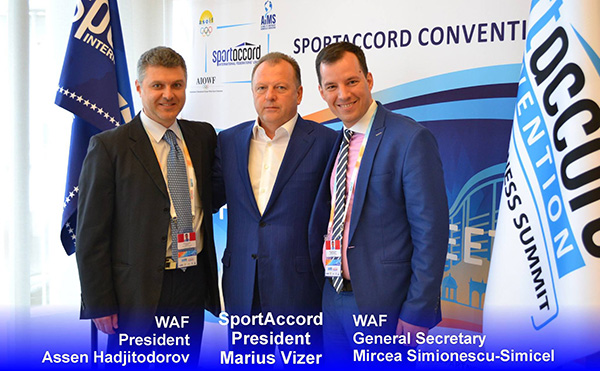 One of the most important was the meeting with the organizer of the World Combat Games, Mrs. Lisa Allan with who we started the discussions to include armwrestling into the program of 2018 World Combat Games in Lima-Peru. We have big chance to successfully pass all the requirements.

Another big achievement was the meeting with the President of International University Sports Federation (FISU), Mr. Claude-Louis GALLIEN. We received information and advice on how to apply and achieve FISU membership and we started the preliminary discussions to organize the 2017 World Armwrestling Students Championship under the umbrella and patronage of FISU.

WAF President and WAF General Secretary had an official meeting with SportAccord President Mr. Marius Vizer. We discussed the solutions to the current situation and he assured us of his full support. WAF had an exhibition space together with Malaysia Tourism Agency.

WAF represented our sport, the stand where we set up a table was highly appreciated by our meeting guests, organizers, delegates, management of major international federations, media, authorities and visitors. 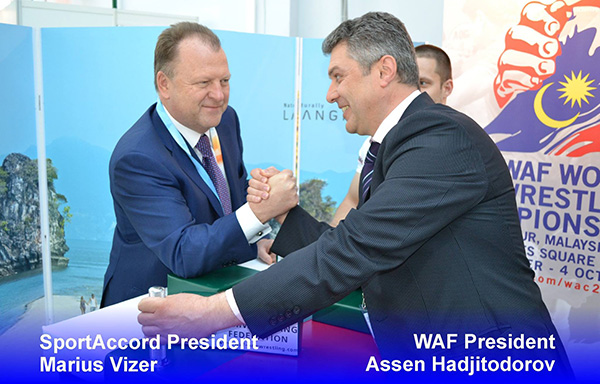 President of SportAccord Mr. Marius Vizer itself stopped to our armwrestling table and had a more casual meeting with WAF President and General Secretary.

For the first time all those major sport organizations met World Armwrestling Federation, acknowledge about our sport and for sure will support us for next General Assembly. They all enjoyed our sport. We received many encouragements to go further and recognize this sport at the highest international level.